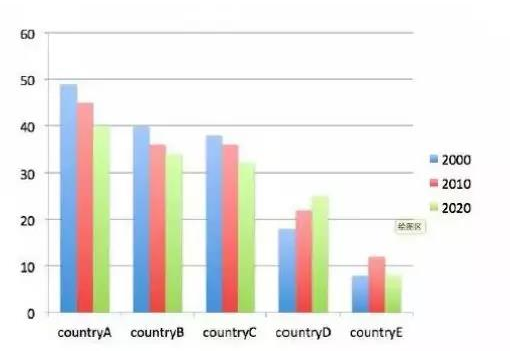 The charts below show the number of magazines sold per person by 5 countries in 2000 and 2010, with projected number for 2020.

In the chart, two historical years and a foreseeable year are investigated in terms of the magazine sales per individual in 5 countries – A, B, C, D, and E.

Countries A, B and C一组：下降

By stark 「表示程度的形容词是小作文的词汇关键」 contrast, the popularity of magazines increased in D and E in 2010, as the sales grew by 5. The anticipation for 2020「于是后面可以用will」suggests that D’s number will be greater than in 2010, and E will witness a decrease on the 2010’s level 「用来表述比较关系的定语要写清楚」. In addition, it is notable that these two countries had significantly lower sales (approx. 20 and 10 respectively) than A, B or C.

Overall, A, B and C were vastly different from D and E as we look at the sales and the pattern of change, and the difference is likely to remain.

A had the highest sales of magazines in the two historical years, followed by B and C. 「排序(描述数据之间的关系)写法：适合于数值靠近的项目之间」In A, the respective sales were 48 and 45, and in B and C, the numbers ranged between 35 and 40. D and E witnessed significantly lower sales, as their sales of magazines were around 20 and 10 in the two years. 「用状语从句也可以用来描述数据情况，不要依赖定语从句，并且，用状语从句描述时，有“事件感”」

According to the anticipation, the sales of magazines will, in four of the five countries, decrease compared with those in 2010. In the four countries, the estimated sales figures for 2020 are only slightly smaller. The situation in D will be different. 「用句子描述信息之间的逻辑关系，而不拘泥于短语形式的逻辑连接」The year of 2020 will see increased sales compared with those of 2010.

Overall, each of the countries had stable sales of magazines, despite the changes, and in the future year, the number will not be markedly different.